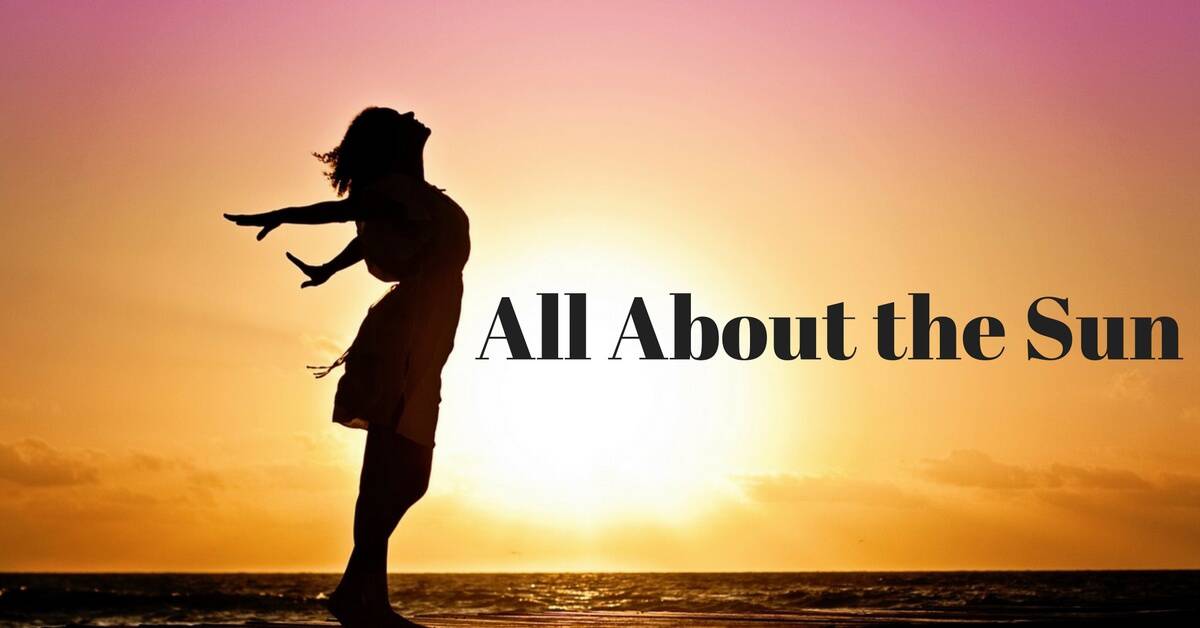 Here at CC Sunscreens, we provide our clients protection from the sun. We are grateful for the sun for what it brings, while at the same time we are wary of the dangers of too much exposure. But how much do we know about the sun?

Today, in a fun turn of pop science, we consider the center of our solar system – the Sun!

What is the Sun, Really?

When was the last time you thought about the sun? Well, we know that it rises and sets, at similar times each day. And most kids will be able to tell you that the Sun is a star, which is at the center of our solar system (solar – coming from the Latin for sun).

Compared to Earth, the Sun is enormous: the diameter is 109 time greater than Earth’s and its mass is 330,000 times heavier! In fact, the Sun accounts for 99.86% of the total mass of the Solar System.
As a hot sphere of plasma, the Sun generates a magnetic field and is composed of elements such as hydrogen, helium, oxygen, carbon, neon, and iron.

The Sun in Human History

The Sun has been around for 4.6 billion years, and scientists jokingly refer to it as “middle-aged.” Throughout human history, the Sun has played an enormous role in religion and culture, as well as how we’ve come to understand our place both on Earth and in the greater Solar System.

Ancient cultures such as the Egyptian Ra, Hindu Surya, Japanese Amaterasu, and the Aztec Tonatiuh (to name a few) viewed the Sun as a deity. Sun worship was common in these, and other ancient cultures. Solar eclipses have also influenced many ancient practices.

The Sun has also been a source of intellectual curiosity for humans throughout history. Before Copernicus, who developed the model of planets rotating around the Sun, ancient Greek philosophers and scientists suggested similar theories. The Sun has also influenced other major scientific breakthroughs, such as Isaac Newton’s observations of the many colors of light waves to Lord Kelvin and Hermann von Helmholtz’s work on the Sun and gravity.

In the 20th century, we saw how the Sun contributed to mass-energy understanding in Albert Einstein’s theory of general relativity. Scientists continue to study the Sun, observing its solar flares and its constantly evolving heat output in relation to climate here on Earth.

For a history lesson on Arizona’s sunshine specifically, click here.

How the Sun Supports and Sustains Life

The Sun has played a major role in biological proliferation on Earth. Our societies cultivated agriculture thanks to the energy provided by the Sun. In Harold McGee’s On Food and Cooking, he meditates that in eating cheese from different regions, we are sampling the terroir of the area. Sun is captured and transformed into chlorophyll for grass and greenery that is then eaten by cows, which are then milked. This milk, which varies depending on the consumption of the cow, is turned into cheese. A piece of cheese, in many ways, captures a summer season for you.

Remember when you were a kid and you were told not to stare at the Sun? Well, it’s true that looking at the Sun for an extended period of time does cause pain to the naked eye. While the Sun has provided our planet with energy and life, it is also important to remember that exposure to sunlight over long periods of time may be detrimental to our bodies! The Sun produces ultraviolet rays which could be harmful (Myths About the Sun).

At CC Sunscreens, we provide top of the line sunscreens and patio shades to protect you from the harmful rays of the sun while also ensuring that you may enjoy the beauty of sunrises and sunsets in your Arizona home.

Reach out to us to schedule your free, no obligation, in-home quote and consultation today. Find out why we have one of the best reputations in the business.
(602) 795-4258