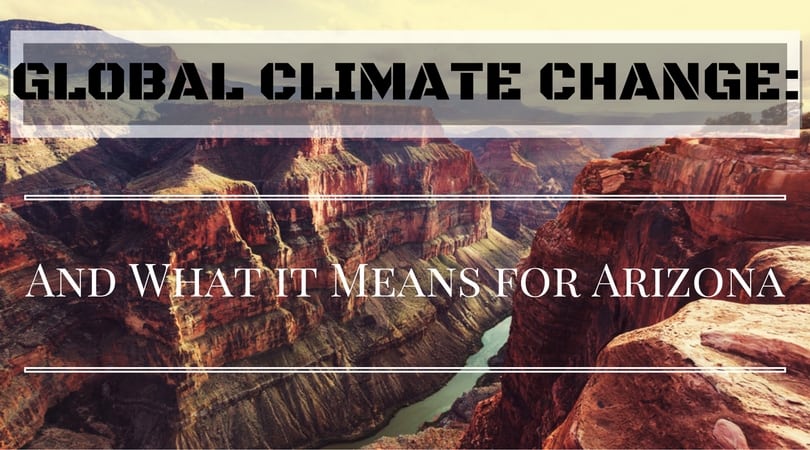 On a recent blog post, we introduced the history of Arizona’s sizzling weather, as well as ways in which people living in our great state have attempted to keep cool throughout time. After researching and sharing Arizona’s hot past, we thought it appropriate to discuss the predicted future of Arizona and how climate change is forecasted to impact the Grand Canyon State, as well as ways you can protect our environment, protect your home, and keep cool for years and summers to come.

While considered controversial by some, the facts point to global warming as a real phenomena occurring on our planet and affecting ecosystems and weather patterns on an international scale. Across the US, every season is gradually experiencing warmer weather in each of the continental 48 states, with the exception of the summers in Iowa and the Dakotas.

How has global warming affected Arizona specifically? According to weather data from 1970-2016, during winter, our state is warming relatively slowly. It is ranked 44th overall. During fall and summer, Arizona ranks 5th and 8th respectively for the quickest warming speed across the 48 states. If that wasn’t scary enough, our lovely spring season has gotten much hotter. We are ranked #1 in warming speed in this season – meaning our springs have gotten hotter more quickly than any other state in our country.

How do scientists predict the future will look for Arizona? During a 2014 address at the University of Arizona on climate change, Gregg Garfin, an assistant professor and assistant specialist in climate, natural resources and policy in the UA’s School of Natural Resources and the Environment, states that average low and high temperatures in all Southwestern states have seen increases over multiple years, and this trend will only continue to rise. 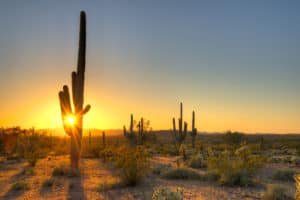 By 2099, it is predicted that temperatures in Arizona will have risen 8 degrees on average. Garfin stated, “Also, we’ll see longer heat waves, more days over 100 degrees, and fewer cool nights, in addition to a decrease in spring precipitation, all under the assumption of continued high greenhouse gas emissions.”

In an official release from The White House regarding climate change, it is predicted that Arizona will suffer negative implications in the areas of agriculture, water, health, ecosystems, and native tribes. It also outlined some promising steps Arizona is taking to reduce its carbon emissions and overall impact on the environment. Since 2009, the Obama Administration has supported 11,990 renewable energy projects in Arizona, which have drastically helped our state in reaching its goal of generating 15% of it’s energy from renewable resources by 2025.

What Can I Do?

By installing professional window sunscreens to your home, you’ll be able to lower your energy emissions (and bill) considerably. CC Sunscreens’ protective window screens block 48% of the sun’s heat from even touching your windows – thus dramatically decreasing the temperature of your home.

Protect the environment, your home, your family, your possessions and your wallet by scheduling your free in-home consultation and quote from one of our experts at CC Sunscreens.