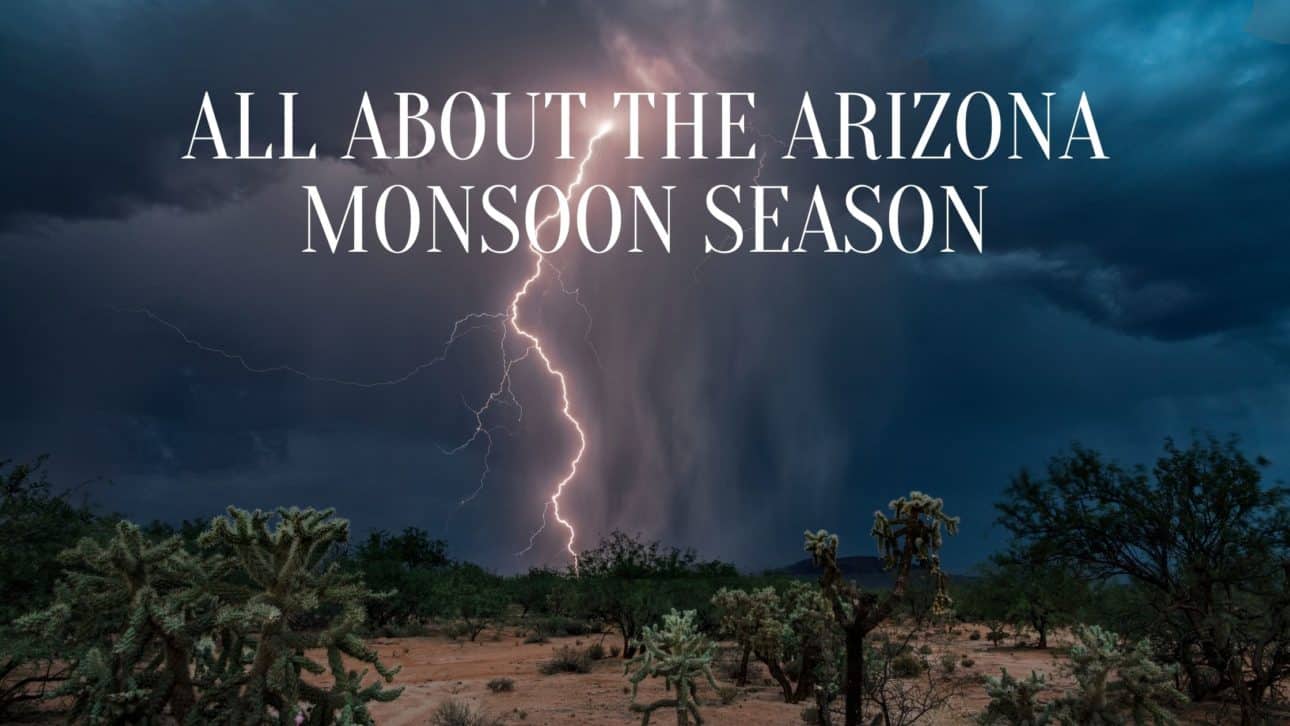 Here in Central Arizona, our summers can be punctuated by dramatic storm activity and a surprising amount of rainfall. The Arizona monsoon season is a regular weather pattern for the area that takes many newcomers unawares. While climate changes have made summer monsoons less dependable, the weather pattern is a regular phenomena that may return this year, although in late spring it is still too early to say the type of rain we will see.

Where Do the Monsoons Come From?

Monsoons are meteorological events defined by shifting air and wind flow patterns, rather than solely by intense rainfall. In fact, it is the change in wind direction that is precisely what signals the conditions for our Arizona monsoons to occur. The summer in the Sonoran Desert comes with a general change in the direction of airflow in the Southwest. Instead of originating in the west and north, wind tends to come from the east and south. This change happens bringing air and water up from the Pacific Ocean and Gulf of Mexico.

The monsoons that we see here in Central Arizona have their origins in Mexico. The summer heat in the desert creates low pressure near the ground while a simultaneously high pressure subtropical front pushes northward from the ocean. The ocean air front arrives with moisture – and combined with the draw of the surface low pressure in the desert, monsoon rains can develop with remarkable speed and force.

While the summer monsoons are often a part of Arizona’s summer weather patterns, there’s no guarantee they will occur every year. With climate extremes becoming more pronounced and long periods of drought, sometimes the monsoons largely pass us by. With two extremely dry and hot summers recently behind us, it is still too early to tell if the monsoons will occur this summer. The chance of monsoon thunderstorms in the Phoenix region is highest between the temperatures of 100°F and 108°F.

However, the chance of rain appears to also be dropping because of some man made factors. The urban expansion and development of Phoenix has left a lasting impression on the weather. With asphalt and concrete absorbing the sun’s heat, the urban areas of Central Arizona have become what is known as a “heat island”. The extreme heat and aridity of the heat island effect has the capacity to evaporate and dissipate approaching monsoon storms, directing them around the hottest areas like water pushed around a rock protruding from a stream.

On the plus side, less monsoon rains mean less risk of flooding and flash flooding in the city. Monsoon rains can be extremely powerful and can become dangerous when water breaks out of control. However, the diverting of monsoons isn’t great. With the rainfall comes much appreciated relief from the heat, bringing down extreme temperatures and sustaining local ecosystems.

The monsoon season brings several other weather risks along with it that it is important to be acquainted with if you are living in Arizona. Flash floods are frequently the most deadly outcome of sudden heavy rainfall in the desert, but dust storms, gustnadoes and tornadoes all can accompany monsoon weather patterns.

To avoid flash flooding, seek shelter in heavy rain, and in general seek high ground. Get away from dry washes or arroyos, streams and rivers that can quickly and chaotically flood. Never attempt to cross running water of unknown depth either in a vehicle or on foot – you can easily be swept away by unpredictable currents.

Dust storms like habboobs and gustnadoes bring with them extreme limitations to visibility. Seek indoor shelter if you are outdoors. Cover your face and eyes and stay low to the ground if no shelter is available to you. If you are driving, pull to the shoulder and wait for the dust storm to subside. If you cannot get out of traffic, slow to a cautionary pace, use your emergency lights and car horn to indicate your presence to other drivers who may not see you.

Tornadoes too can blow in with the monsoon weather. Seeking shelter is the safest course of action in tornado conditions. Try to position yourself in a small, interior room until danger has passed.