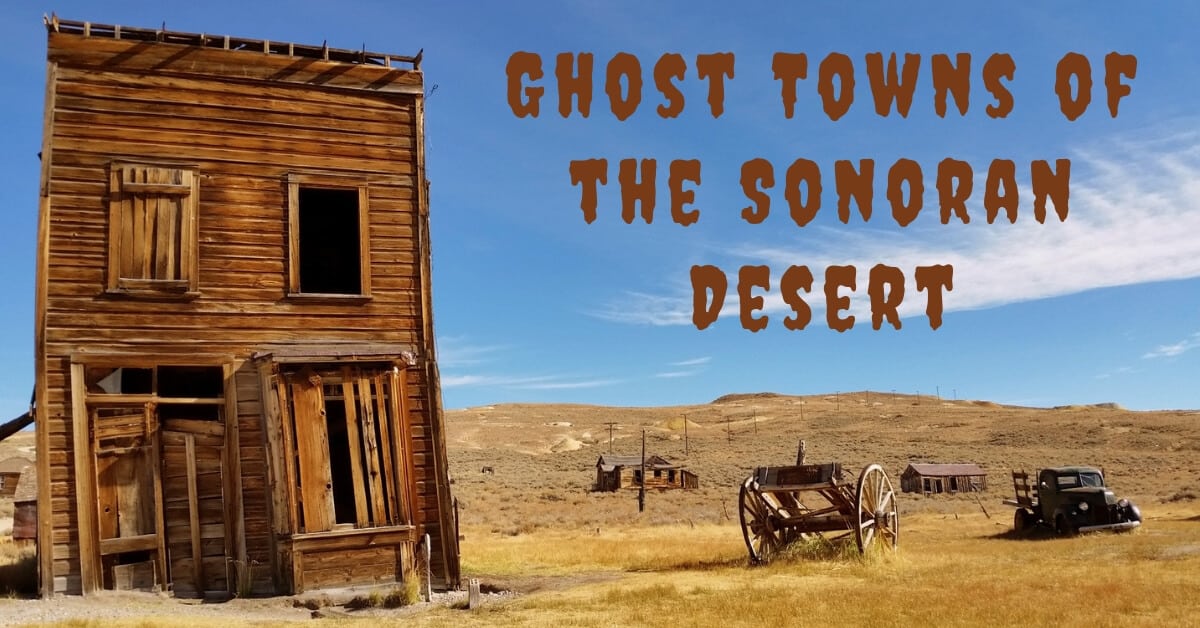 Happy Halloween! October is the time for haunted houses and dressing up like ghouls and monsters. In Southern Arizona, it’s also the perfect time to visit some of our colorful history – ghost towns! Ghost towns exist across the country, but many are clustered in the Southwest where mining booms gave rise to short-lived frontier towns, many tucked along forgotten dirt roads.

When planning a trip to visit Arizona’s ghost towns, traveling in a high-clearance vehicle is recommended. Always pay attention to the weather around your trip. Many ghost town roads are not maintained well and may get flooded or washed out. While many ghost towns and ruins can be reached without four-wheel drive, some destinations require it, such as the King of Arizona mining operation.

While Yuma is an active city, it is home to the well-preserved ruins of the Yuma Territorial Prison, built in 1876 and housing thousands of prisoners until it was closed in 1909. The next year, it reopened as Yuma Union High School. It remains unknown how much the high school felt like a jail, but the school closed a brief four years later.

Today, much of the prison still stands and is open for exploration. Ominous cell blocks and a standing guard tower still mark the grounds where the full stone structure was built. The prison grounds have now been converted into a state park, open to the public.

Few towns loom as large in Arizona legend as the notorious wild west town of Tombstone. Tombstone is located about 70 miles east of Tucson and was the major settlement in the area during the mining boom. Reaching a population peak of over 15,000 residents, Tombstone is now a popular tourist destination.

Well-preserved remains of the frontier town include the Boot Hill Cemetery with its rustic and witty grave markers. Also still standing are a general store, courthouse, theater and the notorious OK Corral. The OK Corral was the site of perhaps the most famous gunslinger shootout in history where Doc Holliday, Wyatt Earp and his brothers faced off against the McLaury and Clanton brothers.

Tombstone became a ghost town in the late 1880s, starting when widespread flooding ruined the bulk of local mining operations. Numerous other ghost towns exist on the periphery of Tombstone, making it a great central location for a weekend ghost town road trip.

The area around Tombstone holds plenty of history and natural beauty. If you have extra travel time on your trip, exploring these other ghost town locations is a fun way to touch history.

One of the most interesting satellite ghost towns of Tombstone is Fairbank, which lies about 10 miles to the west. Fairbank, the frontier town, was built on the site of a former Indian settlement that has been dated to 1700. Now, many buildings from the mining boom era still stand in Fairbank including a well-preserved general store and residential buildings. A short hike from the center of town can be made to a mill site. Remnants also remain of Fairbank’s role as a rail stop and supply town for Tombstone.

The ghost towns of Charleston and Millville were the primary milling hubs for Tombstone, located about 10 miles to the southwest. They are now completely abandoned and only a few walls remain standing in both settlements, which fell in an earthquake in 1887. Even at that point Charleston was in decline as trouble descended upon Tombstone. Now the sites are only accessible by seldom used roads, so plan trips to these ghost towns carefully.

The small town of Gleeson still maintains a population of residents in addition to being rich in historical charm. Resting about 15 miles east from Tombstone, Gleeson was a small mining settlement that maintained a peak population of around 500 people until a dramatic fire leveled most of the town in 1912. The town persisted and rebuilt to serve the war effort, and several historic buildings still stand.

Courtland lies about 20 miles away from Tombstone to the northeast. Few ruins still remain of this short-lived copper mining boom town. Although railroads and settlers rushed in, the closure of the mines in the 1920s led to a steep decline. A few standing walls in disrepair remain and can be viewed from the road.

While these ghost towns bake in the Arizona sun year-round, there’s no reason that you have to! Custom sunscreens from CC Sunscreens can keep your home cool and your energy bills low. Sunscreens offer great protection from the heat and are custom designed to fit perfectly into your home’s style. Unlike air conditioners or evaporative coolers, sunscreens don’t contribute to your energy consumption – they simply and effectively keep your home comfortable year-round even in the Sonoran Desert’s extreme climate. Are you ready for a great option for desert living? Contact us at CC Sunscreens today!