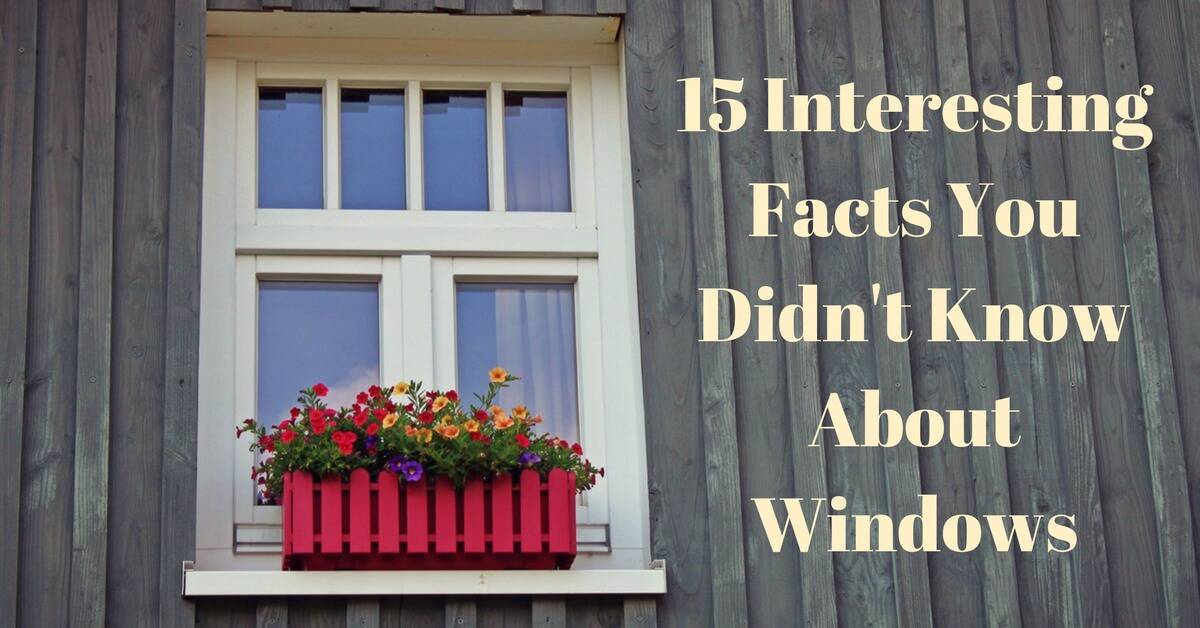 Windows are one of those things we would never want to live without, but don’t spend much time contemplating. We’ve all spent countless hours gazing out of them through school and into the workplace, love adorning them with curtains or planters, and even loathe their bi-weekly clean. Why then, do we know so little about windows? This week, we’ve decided to indulge in a little bit of history, fun facts, and helpful hints: all about windows.

1. Before glass, windows were commonly made of paper, cloth, animal hide, flattened pieces of animal horn or thin slices of marble (wikipedia.org).

2. The first known “glass” windows were likely produced in about 100 A.D. by the Roman Egyptians. These windows were extremely thick and almost impossible to see out of. It would be almost a millennia before windows became as transparent as we now know them.

3. In the late 1600s, glass windows were considered a luxury, and even the wealthiest only had windows in their most important rooms. Windows were so prized that aristocrats who were away for months visiting their other estates would have their windows taken down and stored in their absence (apartmenttherapy.com).

4. Glass windows only became common in homes in the early 17th century.

5. While it is estimated that the average US home has about 8 windows, the White House boasts a crazy 147. This is no match for the Buckingham Palace, which has approximately five times as many windows, coming in at a whopping 760 (worldsgreatestwindow.com).

6. In San Jose, California, the Winchester House is a mysterious and famous home once owned by the widow named Sarah Winchester. Creepily, the woman’s favorite number was 13. This number is denoted throughout the house, including many rooms housing 13 windows. (worldsgreatestwindow.com).

7. At one point, homes in Amsterdam were taxed based on the number and size of windows on their façade. The larger the windows, the higher the taxes. (bringingbeautyhome.com).

9. Stained glass windows are a staple in churches and cathedrals. The method used to making stained glass is the exact same today as it was when it was originally created in the middle ages. (lead-windows.co.uk)

10. Even in good weather, it takes window cleaners an average of about 1 month to clean the entire Hearst tower in New York City from top to bottom. (ny.curbed.com).

11. Considered the tallest building in the world, the Burj Khalifa, in Dubai houses an amazing 34,348 windows (burjkhalifa.ae).

12. The Latin word for window is fenestra, and can also be translated as “hole in the wall,” “loop hole,” “opening for light,” or “opportunity.” Makes sense, when you think about the silly saying, “If a door closes and another doesn’t open, go out the window!”

13. According to the US Department of Energy, 25% of the average household’s energy bill is due to leaky or faulty windows, skylights or glass doors. You can reduce your bill by about 15% by installing double pane glass, airtight frames or buying windows with Energy Star ratings. You can save approximately 25% of your energy bill by professionally installing sun screens to your home’s windows.

14. Increase natural light by adding skylights. It is estimated that skylights allow about 30% more light into your home than vertical windows of the same size.

15. Research the best windows for your home. There are many types and materials of window casings available. If your budget is tight, consider vinyl or aluminum. Vinyl is easy to maintain and the most affordable, but tends to fade over time. Aluminum is also affordable and easy maintenance, but does not offer the best insulation. Natural wood is a beautiful option, and great for insulation. Watch out though, as wood can easily become very expensive and is susceptible to swelling and contracting. For those with quality as the highest priority, clad is a great option. While expensive, clad has wood on the inside and aluminum on the outside, offering the best of both worlds.

We hope these fun facts will one day help you win a game of trivia. Until then, if you have any other questions about windows or how protective solar screens can save you money and protect your family, reach out to us at CC Sunscreens. We look forward to hearing from you soon.

We are proud to serve families in Glendale, AZ and throughout the entire Phoenix area. Reach out to us today.
(602) 795-4258