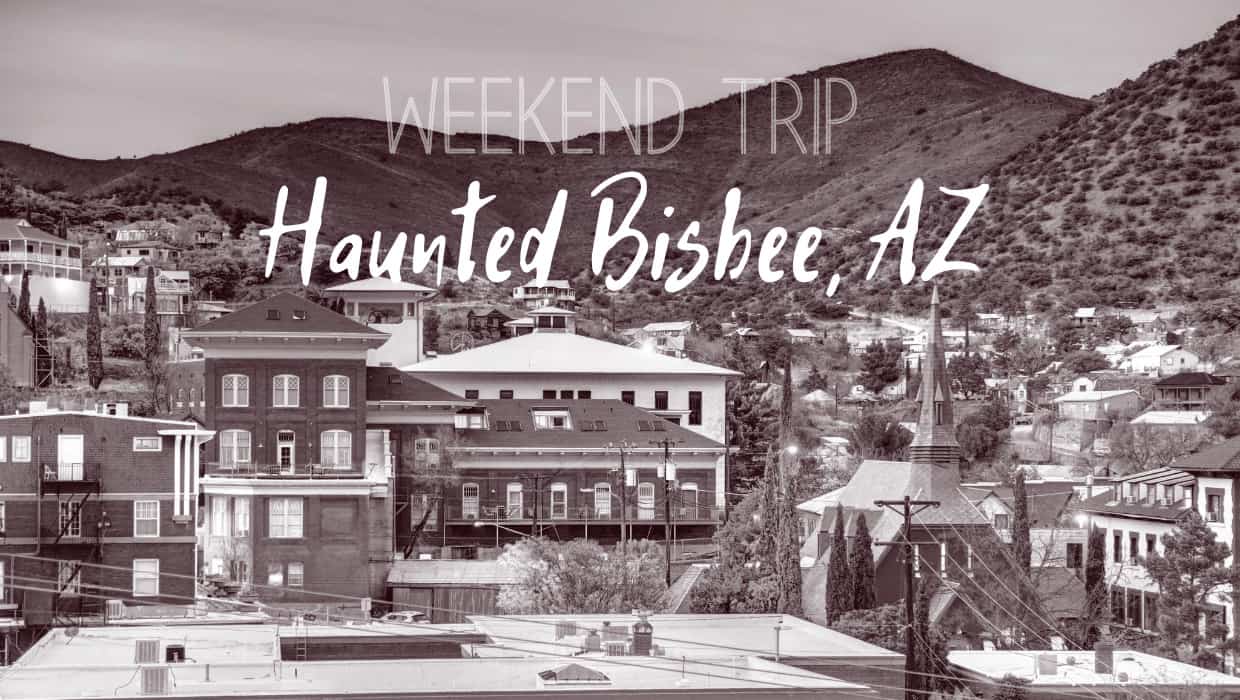 From the red rocks of Sedona to the utopian architecture of Arcosanti, our state never fails to surprise and amaze us. While the world these days might be scary enough for us, we’re always excited to explore all the corners of Arizona. That’s why when we learned about the historic and haunted town of Bisbee, we couldn’t say no to checking it out.

Bisbee is in southern Arizona, tucked into the Mule Mountains. The town sprung up primarily as a mining town with the boom of the 1880’s when copper, gold and silver deposits were found in the surrounding hills. The early days of Bisbee were markedly lawless, many stories feeding into the legends of Arizona as the “Wild West”.

In truth, much of Bisbee’s mining history revolved around workers for large mining operations that ran through the mid 1900s. While many area miners worked private claims, at the town’s peak in 1910-1920, the mining industry revolved around the mines of the Phelps-Dodge Corporation. Hard conditions and few benefits to the labor led to the Bisbee Deportation where around 1000 striking workers were forcibly removed from Bisbee to New Mexico. Further unrest around mining conditions led to the 1919 Bisbee Riots.

In the post-World War II era mining in the Mule Mountains went into steep decline and took many of the old mining boom towns with it. Bisbee’s population plummeted to just a third of its former peak of over 9,000 people. While Bisbee was rapidly depopulated, it never became a ghost town. In the 1960s a wave of hippies, artisans and bohemians began moving to the town.  Since then, Bisbee has established itself as an arts center of Southern Arizona. The population has stabilized with around 5,000 current residents.

A Slice of History

Part of what makes Bisbee a remarkable place to visit is getting to wander through its historic streets and buildings. Bisbee has maintained much of its historic charm. Even if you don’t head there on a ghost hunt, the town boasts a large population of artists and an impressive selection of restaurants to make any weekend trip jam-packed with things to see and do.

Those looking for ghost-adjacent entertainment won’t have far to travel in this town. Plenty of bars and restaurants in the area have tales of unexplained phenomena to share. Local legend, Magic Kenny Bang Bang hosts evening performances at the Bisbee Seance Room where he blends area history and lore with skillful parlour magic for a one-of-a-kind experience.

If you do head to Bisbee looking for the paranormal, however, you are in for a real treat. Bisbee’s history has left the town crawling with ghosts – and ghost hunters! The Bisbee Grand Hotel rests at the center of this lore, claiming that strange unexplainable activity has been seen and sensed throughout the hotel, including in all 13 guest rooms. The Copper Queen hotel also has residents from beyond, with three distinct ghostly entities haunting their halls.

Visitors to the Brewery Gulch district of Bisbee will be introduced to a whole other population of ghosts whose stories reportedly revolve around the area’s bygone bars and brothels. Sightings of ghosts frequently occur in local establishments and even out on the street, while the area park is rumored to be a good place for children to meet “invisible friends”.

For those wishing to cover a lot of ground, several historic tours offer excellent overviews of haunted Bisbee. The lamp-lit Old Bisbee Ghost Tour offers a nighttime walking tour of some of Bisbee’s best known haunts, accompanied, of course, by the ghost stories behind each locale. Queen Mine takes visitors down into abandoned mining operations and alongside the history of Bisbee’s mining, offers up a healthy dose of ghostly lore.

For many Arizonans, the only thing haunting their houses this summer is heat! CC Sunscreens can help – our stylish, top-quality custom sunscreens will exorcise excess heat from your home and keep your home energy costs from getting seriously scary. Sunscreens are a great, sustainable way to cool your home in the hottest months and maintain its comfort year-round. If you’ve been searching for summer heat solutions, look no further, CC Sunscreens has got your home covered!