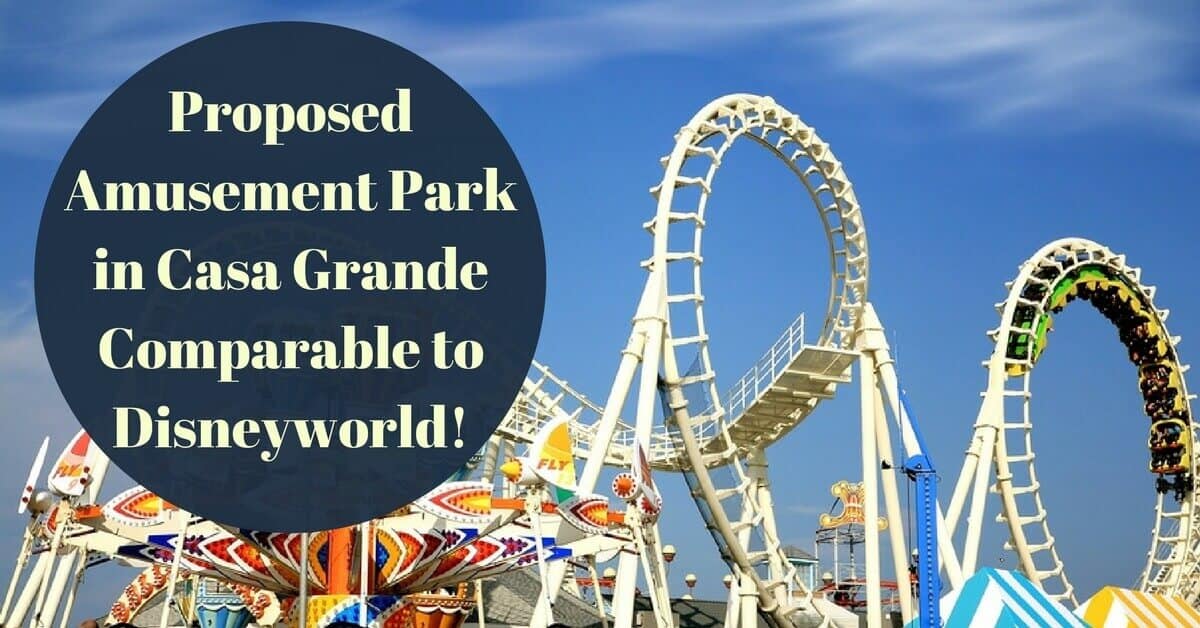 As the fifth largest metropolitan area in the United States, it’s a surprise that it has taken us so long to create a major theme park in our area. Luckily for locals and visitors alike, the wait is finally soon to be over! A massive 1,500 acre theme park has been proposed in our very own Casa Grande. The park is predicted to be quite amazing, as it has even been compared to Disneyworld in Orlando.

The plan for the theme park was proposed by Block Sports Group, who zoned out an area between the I-8 and I-10 freeways for the 1,500 acre project in Casa Grande. The name of the park will be “Dreamport Villages” and is proposed to include two resorts, an indoor water park, an extreme sports park, wildlife exhibits and rides, as well as shops and restaurants. The villages are proposed to take between 7-10 years to build, and are estimated to cost about $4 billion.

According to abc15.com, the “Extreme Sports Park” will be nicknamed “The Block” and will offer exotic car driving experiences, go-kart racing, zip lines, a 12 acre lake with two wakeboard cable systems, and rock climbing. The wildlife exhibits and rides will be housed in the area of the park aptly named “The Wild” and is set to include a log flume ride, canoe rides, a carousel, animal exhibits, animal shows and a 300 room hotel. “The Marketplace” will offer 420,000 square feet of retail shops and restaurants neighboring the 12 acre lake that will have water taxis available to guests. The park is also set to include a welcome center, convention center, and RV park.

Even though “Dreamport Villages” is in its very early stages of development, it’s no wonder this imaginative and exciting project has been compared to world-renowned Disneyworld in Orlando.

In August, a public city council meeting was held in Casa Grande where tax incentives and zoning changes regarding the theme park plans were approved with a unanimous vote. When the public had their opportunity to speak – it was clear that residents and community members are in approval as well. The project would bring about 4,700 permanent direct and indirect jobs to Casa Grande, with 2,800 jobs in the park itself. During construction, the project is estimated to last about 7-10 years and require about 9,000 construction employees during this time. The new jobs were not the only reason people were excited about “Dreamport Villages”. The park will also bring new revenue to the city, attracting tourists to Casa Grande who currently stick to cities like Phoenix and Scottsdale. According to a presentation which was put together by Block Sports Group, the project is estimated to create at least a yearly revenue of $400 million to Casa Grande.

All about Casa Grande

Casa Grande was founded in 1878 and incorporated in 1915. The city was named after the Hohokam Indian ruins it has about 54,000 permanent residents and was voted one of Travelocity’s 25 Most Giving Cities in the US. Currently, tourism to Casa Grande includes indoor and outdoor skydiving, a myriad of golf courses, Casa Grande main street historic downtown, and the Rooster Cogburn Ostrich Ranch. Combine all of these unique experience opportunities with a massive theme and wildlife park, and Casa Grande will soon be a top destination for visitors from both inside and outside Arizona. For more information on tourism in Casa Grande, visit their chamber of commerce website here: https://casagrandechamber.org/.

At CC Sunscreens, we care about what happens in the Phoenix and surrounding areas. We are proud to be industry leaders in installing professional grade solar screens for windows, doors and patios, as well as high-quality anti-golf ball screens. We are proud of the reputation we have built through over 20 years of quality service in the Phoenix valley. Reach out to us today to schedule your free, no obligation, hassle free in home consultation and quote with one of our friendly experts. We look forward to hearing from you and answering all of your questions.