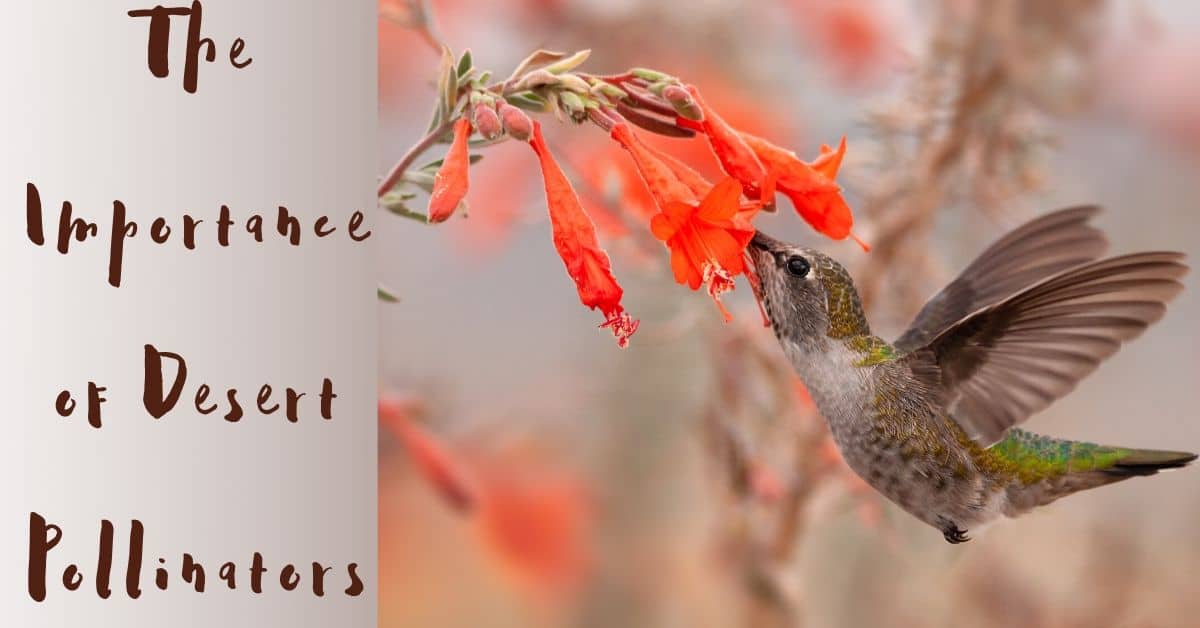 CC Sunscreens has been in the business of helping Arizonans live more comfortably since 1992. We are proud to be a family-run, locally-owned business. All of our employees are committed to honesty, service, and integrity to our neighbors here in the Valley of the Sun. We serve the entire Phoenix metropolitan area and beyond from Queencreek, Sun City, Buckeye, to Cave Creek and all the surrounding areas.

Pollinators are animals that move a plant’s pollen from the male parts to the female parts causing fertilization. Pollinators range in species including insects, vertebrates, birds, and even mammals. Pollinators are responsible for the pollination of most of the Earth’s flowering plants. Over the past decades, researchers have become more and more alarmed at the declining pollinator populations. The decline in the population of pollinators leads to fewer crops and other necessary vegetation.

In 1995, the Arizona-Sonora Desert Museum (ADSM) launched a campaign to raise awareness of the danger of pollinators and the plants they pollinate. This campaign was named the Forgotten Pollinators Campaign (FPC). FPC brought to international attention that the decline of pollinators leads to lower crop yields and extinction of keystone plants.

The Forgotten Pollinators Campaign restructured and expanded in 1998. The Arizona Sonora Desert Museum saw that partnerships were integral to spreading awareness. ASDM made alliances with many universities in the United States and Mexico as well as the Bat Conservation International.

The FPC hopes to not only perform research but also get the community involved. Spreading awareness through community outreach programs is one way they support conservation efforts. Teaching the public about species that link the fate of many other species goes a long way to finding solutions.

Keystone species are species that dramatically affect the ecosystem. Without them, the changes would be irreversible. These are some common examples in the Sonora Desert with some recommendations on way to help.

Lesser Long-Nosed Bats migrate up and down between Arizona and Mexico. They feast on agave and columnar cactus. Urbanization has made their food source scarce. Another problem faced, is illegal hunting. Farmers kill them thinking they are vampire bats. Mexicans kill them due to superstitions.

Recent studies on Rufous Hummingbirds found them to be suffering from low body weight. The hummingbirds migrate 2,000 miles but the studies show if the hummingbirds do not find nutrients, their journey is delayed due to longer stopovers. The decline in insect species, due to pesticides, is affecting the hummingbird food supply. As well, climate change is causing flowers to bloom earlier. By the time the hummingbirds arrive at the flowers, some may already have gone.

White-winged doves in the Sonoran Desert pollinate the saguaro cactus. Their population is threatened by hunting, deforestation, and lack of grain crops.

Over a third of the world’s crops rely on pollination from bees. Beekeepers are experiencing a decline in populations, but the demand for bee pollination is only increasing. The decline in bees is catastrophic. The reasons for the decline are diverse. They range from loss of habitat to the electromagnetic waves put out by cell phones. The Sonoran Desert is home to one of the most diverse bee populations in the world.

Humans have had a negative impact on pollinator species, but that can change. There are ways to help. In 2016, The Arizona-Sonora Desert Museum launched dozens of gardens throughout Tucson. They hoped to not only create habitats for bees but allow people to interact with biodiversity. They emphasize everyone can make a difference through simple actions.

All life affects the environment to varying degrees. Pollinators are an important part of keeping a healthy environment with biodiversity. Raising awareness among the population can help to curb the negative effects humans have on these species. There are many ways humans can help pollinators and in turn the plants and planet as a whole.

Whether you’re outside gardening or viewing the landscape from your house, CC Sunscreens offers protection for patios and windows. Contact us today to learn more.