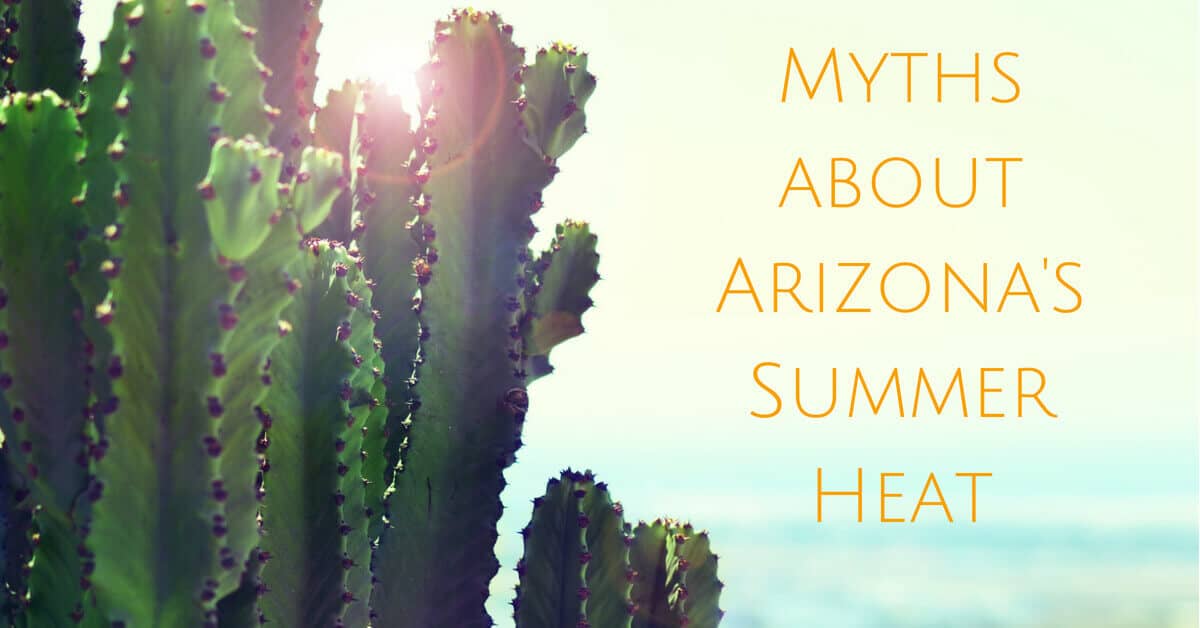 In the thick of summer, Arizona’s reputation for extreme desert heat creates an entire mythology of temperature lore. With temperatures regularly soaring above 100℉ it can get a little hazy separating the burning truths from a mirage of tall tales. Here’s some surprising information about our summer heat.

Myth: Arizona Is the Hottest State

While Arizona is home to the United State’s hottest place, it isn’t the country’s hottest state, by a long shot. When the numbers are crunched, Lake Havasu City holds the honor for hottest summer spot – with a steamy 94.6℉ average. Lake Havasu City also gives Death Valley, California a run for the title of hottest temperature recorded, with a record 128℉ recorded in 1994 trailing the California hot spot’s all time high by 6℉.

When you factor in the entire state however, the picture of Arizona’s heat changes dramatically. Incorporating the milder summers of the mountains and the northern climates in the state means that the cross-state summer temperature is 77.3℉, ranking 11th in the country overall.

Who ranks hotter? By and large, states in the South and Southeast hold down the records for hottest, with hot, flat Texas claiming the #1 spot. After Texas, the muggy heat of Louisiana, Florida, Oklahoma and Mississippi all have average temperatures right around 80℉. While Arizona’s dramatic geology and range of altitudes keeps us from being able to claim top honors for heat, it also provides us with some options for beating the heat!

Myth: You Can Fry An Egg On the Phoenix Sidewalk

There’s no doubt that Southern Arizona summers sends the mercury soaring. “Hot enough to fry an egg” seems nigh well possible when the temperature tips over into three digits. But is a heatwave afternoon indeed powerful enough to literally cook an egg?

Not quite. While Phoenix residents can count on 100℉ days, an egg needs at least 158℉ to cook thoroughly. Not only is 158℉ well above Phoenix’s record temperature of 122℉ and even surpassing the record temperature for the entire planet – 134℉ recorded in Death Valley in 1913- by a considerable margin.

You can harness the Arizona heat to cook an egg successfully with a simple solar oven. For a fun and tasty summer project, try cooking a simple meal in a homemade solar cooker.

There’s a bit of truth to this one, and it may well be tethered to larger changes in the climate. As the record stands however, the hottest temperature recorded in Phoenix, 122℉, has not been surpassed since 1990. There are other metrics however, which do indicate that Phoenix is staying hotter longer.

Temperature records show that the average nighttime temperature for the area is rising, probably largely due to urban development, which makes the summer heat feel more relentless throughout the season. Additionally, data gathered by the National Weather Service shows that summer-like weather patterns are extending through more of the year. In Phoenix, that means that our summer temperatures seem to kick off earlier than ever before and now stretch well into October.

So, while we’re not topping our all-time record heat, we are experiencing more heat overall – both during more hours of the day and more months of the year, which can create more discomfort and lasting impact than a standalone heat marker.

While the sun looks to be at its most ferocious when it is directly overhead, noon simply sets the stage for the truly hottest time of day – mid afternoon. From around 3:00 until 4:30 PM, the temperature on the ground reaches its hottest point, with accumulated heat gathered throughout the day hits maximum solar gain and before significant heat is lost to the setting sun.

No mistake though, Phoenix heat can be dangerous throughout the late morning and early afternoon and being smart about the temperature is part of living in our beautiful desert. A great way to keep your home and business comfortable all summer and all year is with custom solar screens from CC Sunscreens. Sunscreens are an efficient and stylish way to reflect heat away from your home, reducing energy expenses and stabilizing comfort. If you’re looking for a way to beat Arizona’s summer heat, contact CC Sunscreens today!