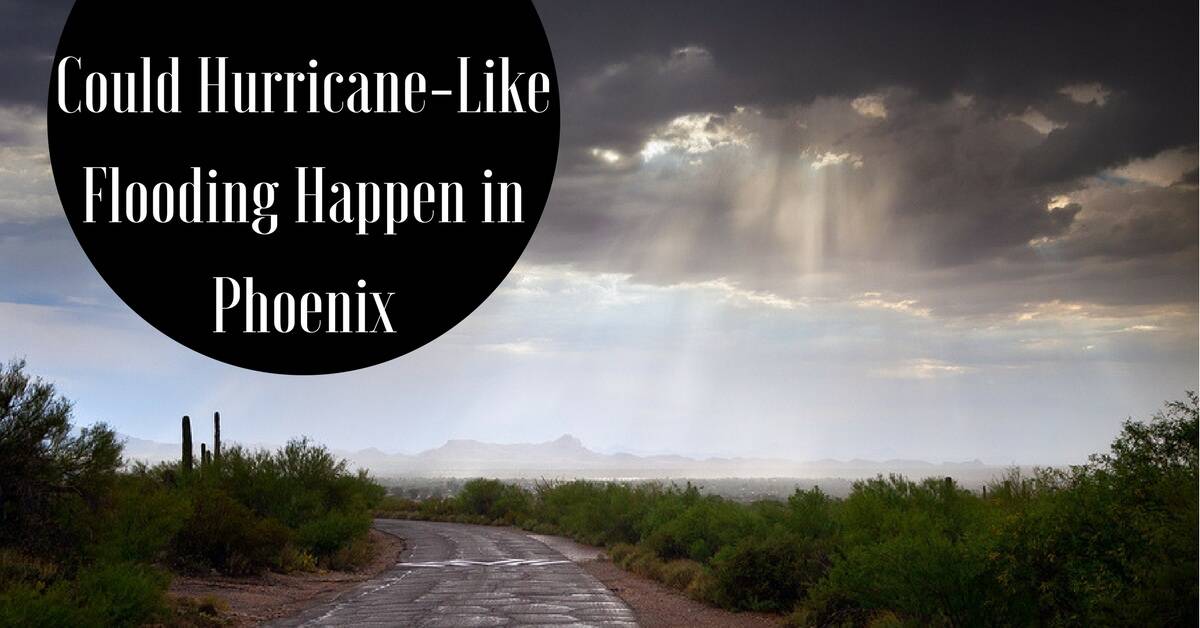 Unless you’ve been completely disconnected from the news or internet in the past few weeks, you’ve definitely heard about the devastating hurricanes pummeling the east coast of our country right now. Hurricane Harvey has brought 50 inches of rain and caused severe flooding and destruction across Houston. The storm was considered a 500 or even 1000-year event. Only a few days later, Hurricane Irma – a category 5 has officially made landfall on Florida.

As we call all our loved ones on the southeast coast or research ways we can help from afar, we may also be wondering to ourselves, “could anything like this ever happen in Phoenix”?

A Little Goes a Long Way in Phoenix

While the chance of a tropical storm reaching our state is very slim, it wouldn’t take 50 inches of rain to cause chaos in our desert city. In fact, the worst flooding in recorded Phoenix history happened only three years ago on September 8th, 2014 – with only 5.5 inches of rain.

The storm was fed by a monsoon coupled with the remnants of a Pacific Ocean hurricane and hit Phoenix in the middle of the night. The rainfall was dramatic, and shattered records across the valley. The heaviest fall was recorded in Chandler with 5.5 inches falling in only 8 hours. Although Chandler received the most inches of rain, it was Mesa that was the hardest hit with the most damage. Over 200 Mesa homes were flooded, the I-60 was shut down due to flooding, and the Loop 202 was shut down due to mudslides in the city.

Flooding also occurred in other areas of the Valley, outside of Mesa. The I-10 was nicknamed the “I-10 Lake” due to the flash flooding leaving people fleeing their cars as they literally float down the freeway in the 3 feet of water that had accumulated there.

Governor Jan Brewer declared a statewide emergency and Mayor Alex Flinter called the storm a “slow moving disaster”, the worst he had ever seen. All of this damage caused by only 5.5 inches of rain in our city. What would the damage look like if we had gotten anything near the 50 inches recorded by Houston?

Why So Much Damage?

“Our soils are different and our topography is different,” Arizona State University climate researcher and professor Randy Cerveny explained to AZ Central. “We don’t need nearly as much rain to cause a problem. If you stop and think about it, we get usually about eight to nine inches of rain a year. There are places (in Texas during Hurricane Harvey) now that had close to seven times that amount of rainfall.”

Why This Time of Year?

September is the time of the year when we transition out of monsoon season with moist, warm air coming from the south and into our usual patterns with fronts approaching from the west, explains Ken Waters – a meteorologist with the National Weather Service in Phoenix. This is also hurricane season, and, in Water’s words, “the magic time when we could get tropical moisture come up and… cause enormous amounts of rain”.

Are Arizona Storms Getting Worse?

According to researchers from the University of Arizona who conducted a comprehensive study – looking at monsoon storms in our state from 1950-1970 and compared them with storms from 1991-2000. The study found that southern Arizona is getting fewer but more intense monsoon storms than 50 years ago. The reason for the increase in intensity was not specifically studied, however, lead researcher Christopher Castro reports that the findings are consistent with what you would expect from a study on global climate change. “Rising temperatures globally could result in more water vapor in the atmosphere. Increased humidity provides more fuel for storms. ‘Our work shows that it certainly holds true for the monsoon in Arizona’,” Castro said.


At CC Sunscreens, we are in the business of protecting your home, family and belongings. Whether monsoon season or not, the threat of harmful UV rays from the sun is prevalent. If you’re interested in learning more about window sun screens or patio shades, reach out to our friendly team today. We look forward to hearing from you.