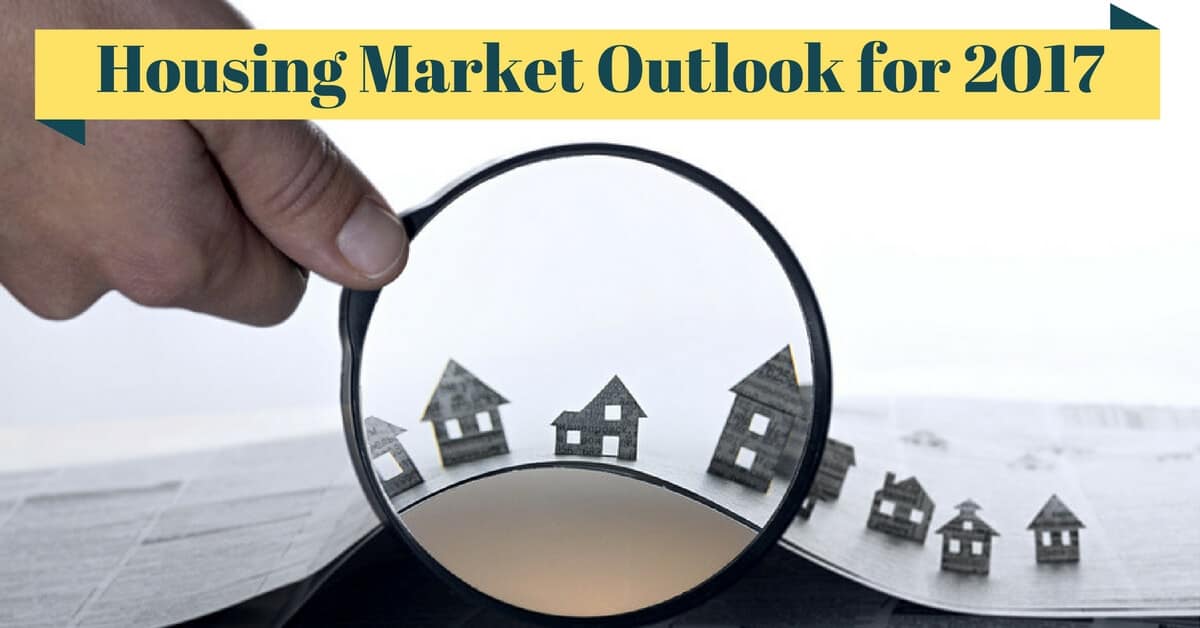 In a recent post, we covered the news that Phoenix is predicted to be the #1 housing market this year. This week, we’ll look through a bit of a wider lens – the nationwide real estate market outlook for 2017.

It’s generally agreed upon that 2016 was quite unprecedented and volatile for many reasons. Real estate was no exception to last year’s unpredictable behavior. According to Svenja Gudell, chief economist at the real estate data firm Zillow, the 2016 predictions were not quite on target. In 2016, builders were predicted to increase new homes – but productivity in this area is still low. Also, home prices appreciated higher and faster than anticipated and home mortgage rates rose above 4% for the first time in years (forbes.com).

Although we saw some pretty interesting activity in many arenas last year, it was actually a relatively good year for the housing market. For example, millennials (who many feared would never enter the market) began purchasing their first homes, mortgage rates remained historically low, and the national home prices finally crossed the prices seen at the peak of the market in 2006. Home sales also increased at higher rates than previous years as more first time homeowners entered the market and boomerang buyers who were burned in the market crash reentered the market.

While no one can predict the future, experts have weighed in on their predictions for this upcoming year. Two major events happened that had opposite effects on the real estate market last year. Firstly, the UK voted to exit the European Union – sending shock waves across the world. Secondly, Donald Trump became the president-elect of the United States. How will these and other decisions affect the market in 2017?

Here are 4 predictions about the national real estate market in 2017:

1. Prices will continue to rise, however not as quickly as before.

Last year, home prices increased every month – and increased 5.61% on a national scale. While home prices are expected to rise, experts predict the increase will be slowed in 2017 because “homebuyer demand is stronger now than it was at the same time last year, and because we foresee a small uptick in homes for sale,” according to Nela Richardson, chief economist at the real estate brokerage Redfin. Predictions from Zillow indicate a rise of 3.2% in median home prices between November 2016 and November 2017. This is much lower than the 6.5% home value index increase from November 2015 to November 2016.

2. Mortgage rates will be unstable.

In June, Britain’s decision to exit the European Union – nicknamed “Brexit” – sent mortgage rates spiraling to a nearly record low. Only a few short months later, the US election of Donald Trump as the next president had the opposite effect on rates. The news of the election is credited in part to the mortgage rate increase of above 4%. The mortgage rate has not been over the 4% mark in over two years. Experts expect more movement in 2017 as new policies take place at a national level. Although movement is expected, the estimates only range from about 3.75% to about 4.6% – which is not too far off from the rates we see today.

4. Affordability will become even worse.

Although incomes are expected to rise in America’s largest cities – the availability of low to moderately priced homes is not. “The irony of the modern housing market is that the places where we are seeing wage growth are places where people can’t live because they are too un-affordable. There is a mismatch,” says Nela Richardson, chief economist at real estate brokerage Redfin. (forbes.com). In previous years, this was not such a huge concern, because new buyers could qualify for subprime loans. With post crash credit requirements – these types of loans are more difficult to qualify for.

If you’re a home-owner looking to improve your property’s value, or if you’re fixing to sell and want to make home improvements, consider custom sunscreens for your home! For more information, contact us at CC Sunscreens today.

Reach out to our friendly team today. We are industry leaders in sun screens, patio shades and anti golf ball screens.
602-795-4258