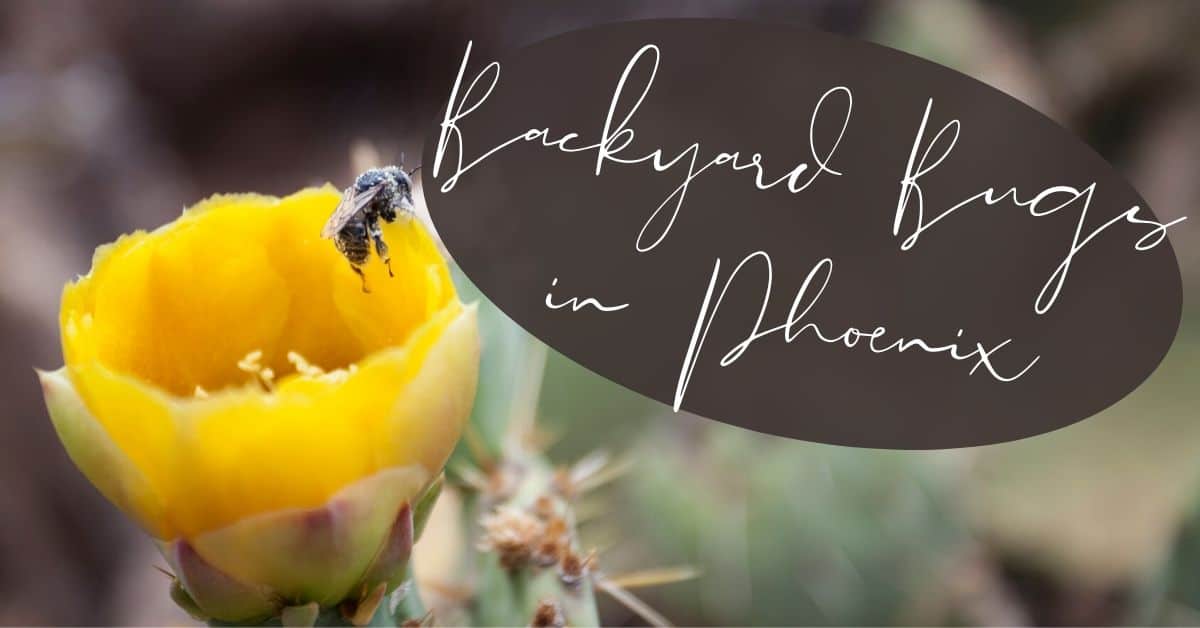 From tarantulas to tarantula hawks, the bugs of the Sonoran Desert have an intimidating reputation. While some of our insects and arachnids are large, poisonous (or both!), many common bugs you’ll encounter in Phoenix aren’t big or bad at all and play integral roles in the desert ecosystem.

Land of a Thousand Bees

While that’s not Arizona’s state motto, it could be. Arizona is home to around 1,300 native species of bees. Bee diversity is vast within our state. Social bees, like the archetypical honeybee, live in groups called colonies and build hives which they protect with their stinging defense. While social bees are the most well known types of bees, many bee species are more solitary. The striking all-black carpenter bees don’t sting and make their homes in perfectly round holes they bore out of old wood or tree branches.

Diminutive Bees called sweat bees can even add a jewel-like flash to your garden. Different species come in splashy colors like iridescent green and red, not just the “typical” bee coloring of yellow and black.

Look Before You Reach

Arizona gardeners do have to work with a caveat that it is never a good idea to reach your hand into an area without visually checking it first. While the odds of encountering them are slim, Phoenix is home to several species of poisonous bugs, including scorpions and black widow spiders.

Of the 30 varieties of scorpion found in Arizona, only the small bark scorpion serves up a truly life-threatening sting. Bark scorpions are adept climbers and are often uncovered on the underside of rocks and other objects, as well as in tree branches and foliage. While bigger scorpion species cut a more striking profile, like the large desert hairy scorpion, the venom of the bark scorpion requires medical attention.

Black widow spiders and brown recluse spiders are other poisonous desert denizens. Both spiders will retreat when confronted by a threat, but when surprised will defend themselves with a painful and venomous bite. Both spiders and scorpions are important for insect control in our ecosystem and are themselves a food source for larger predators.

With a beautiful array of desert wildflowers and warm climate, Phoenix is a great place for spotting butterflies. From migrating monarchs to local species like the Arizona Sister, butterflies add color and delight to the local landscape. Alongside bees, butterflies play a critical role in pollinating desert plants. Arizona’s climate attracts giant swallowtail butterflies, as well and a wide range of dramatically colored species.

For the night owl, desert moths present another vast family of specimens. Some desert moths like the yucca moth, have their lifespan synchronized around various desert plants. Along with bats, nocturnal desert moths also pollinate night-blooming cactus flowers.

We’d be remiss to ignore the ant species of the Arizona desert regions. Most homeowners have realized quickly what determined and persistent creatures desert ant species are, especially when a food or water source has been located. Among the most troubling to humans, Arizona is home to a small desert fire ant. These red ants are by and large tiny -although ant colony workers also include larger ants, a species trait called polymorphism. Fire ant bites burn and itch and their small size can allow them to navigate tiny pathways into homes and businesses, annoying people and pets.

Other ants in our region are more benign, but no less resourceful. Some desert ant colonies develop symbiotic relationships with local cacti, especially in the dry heat of summer. Many paddle cacti species secret water droplets around their thorns. An ant colony will harvest these dew-like drops to sustain itself and, in turn, territorially defend the cactus against larger predators.

The Sonoran Desert is also home to a wide array of arid-adapted beetles. From tiny to tremendous, beetles come in a wide variety of colors, sizes and fill varied ecological roles. One of the most noticeable beetles in the region is the pinacate beetle, a large, all-black bug which forages along the ground and walks with a striking posture-it’s abdomen raised in the air in a near-headstand posture.

While most beetles are beneficial to the environment, some species are borers which can cripple vulnerable trees and plants. Most borers are deterred from invading healthy plants, so the best way to avoid these species is preventative upkeep.

Don’t let bugs deter you from a backyard hang! For an enjoyable time in your backyard, consider patio sunscreens from CC Sunscreens. Custom patio screens make your outdoor hangs comfortable by keeping out heat and harmful UV rays. Call us at CC Sunscreens today to learn more about our patio screens.